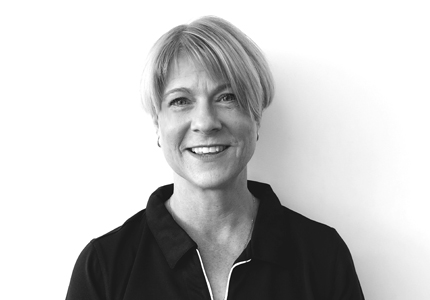 Sandy joined the team in 1999 and became a joint owner in 2012. Before working in private practice, Sandy spent 12 years at the Women’s and Children’s Hospital, developing a particular interest in growth-related injuries. She’s been a clinical educator at the University of South Australia.

Sandy has worked with the State U17, U19 and U21 Netball teams during National Championships and as the Physio for Metro Jets Premier League Netball Team for five years. With over 30 years of experience, she has a passion for assisting people get back to doing what they love.

Sandy’s Mantra: “You’re responsible for your own Happiness“

Running, camping, watching Port Power (especially when they beat the Crows!) and spending time with the family.

Last night, we were blessed to have renowned Pain Science Guru Dave Butler share his knowledge and time in an informal Question and Answer session in the clinic. David Butler is a physiotherapist, an Associate Professor, an educator a researcher and a clinician who has played an instrumental role in helping the physiotherapy world and beyond understand the complexities of chronic pain.
As Adelaide trained physios, we have all benefited from his teachings and are better therapists because of it. Last night was extra special as he announced that it would be his last education session at a small private practice clinic.
So a huge thank you to Dave and to Peter Barrett for organising the session. Great mates that have shared a long and fruitful journey together in the physiotherapy profession.
For more info about the multiple publications that Dave has co-authored for patients to read and learn from, see: www.noigroup.com/shop/

Sad to have missed it, but what a legend, what a physio!

Looking good Dave! As are all my Physio friends. 💕

Good on ya Dave!

Exciting New Therapy is coming to West Lakes Physio By Nicky, our Remedial Massage Therapist……
CUPPING! - What It can do for YOU & Why It is a great Alternative Therapy: westlakesphysiosportsandrehab.com.au/cupping-therapy/
... See MoreSee Less

Need a last-minute Mother's Day Gift?
How about a Massage Gift Voucher to help iron out the tight and tense muscles and help her feel great.
Available from reception and we are open Saturday May 7th until 12 noon.

Masks remain compulsory for staff and patients when in the clinic.  If you have a medical exemption from wearing a mask, please show this when checking in.  We have provided a private waiting room for your safety.

Please consider the following before attending your appointment: